← more from
Memphis Industries
Get fresh music recommendations delivered to your inbox every Friday.
We've updated our Terms of Use. You can review the changes here.

by The Go! Team 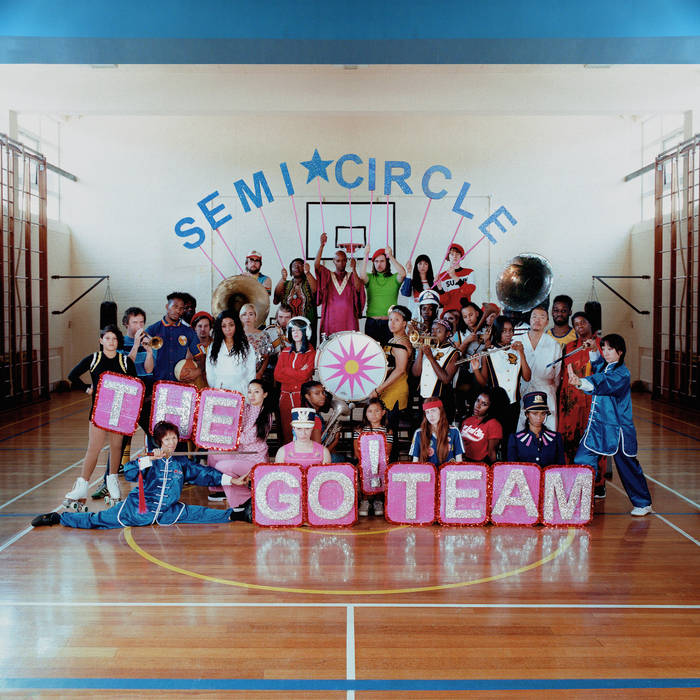 Shawn Grunberger Because sometimes candy sprinkles are just the thing.

Levrikon Somewhat of a return to form for the band, this one blends the older lo-fi '70s hip-hop of the first couple albums with the bubblegum pop of The Scene Between. It's a great mixture, and probably among their strongest albums yet. Favorite track: Mayday.
more...

The Monk Of Funk ™

DJ LaLess aka Will Lowe

The Go! Team have always been cheerleaders for a better world – an outpouring of collective joy in the face of small-mindedness and dismal careerism. They rejoice in the unifying urges and the chance encounters between cultures that lead to something new. They’re a band who still have faith in the power of music to make things better. Now more than ever, we need The Go! Team.

It’s no secret that The Go! Team is the brainchild of one man, Brighton-based melody obsessive Ian Parton. But its membership has never been exclusive: at one time or another, The Go! Team has included on its squad-sheet everyone from Deerhoof to Chuck D to a legion of undiscovered Soundcloud singers. Unlike the group’s previous album, 2015’s The Scene Between – which was essentially a solo project, following the dissolution of the previous Go! Team lineup – Ian began work on their fifth album SEMICIRCLE with the vital input of current live players Simone Odaranile (drums) and Angela ‘Maki’ Won-Yin Mak (vocals), plus original Team members Sam Dook (guitar) and Ninja (irrepressible rapping).

In his head was the idea of a school marching band gone rogue, chucking away their sheet music to blast out Northern soul stompers or Japanese indie-pop swooners or old-school hip-hop jams. “I like the swing and the toughness of marching bands, the physicality of feeling a beater walloping a bass drum,” explains Ian, “but I wanted to reclaim them from patriotic or sporty associations. That was the kick-off for this record.” Yet his extensive sample library could only take him so far. In order to fully realise his vision he knew he had to reach out, to entice a group of unlikely new collaborators into The Go! Team fold.

So Ian made a pilgrimage to Detroit – city of Motown and The Stooges, of musical (and actual) revolution – where he hooked up with The Detroit Youth Choir. Their age was key; he didn’t want kids (too twee) but nor he did he want adults, with all their emotional baggage and wariness and tendency to over-sing. Equally he wanted to avoid the religious connotations of a church or gospel choir. “I’ve always had a thing for gang vocals and group singing, particularly the roughness of community choirs,” says Ian. “Normally they might be singing showtunes or whatever, but I like the idea of getting people to do something they wouldn’t normally do. I like making things happen that wouldn’t otherwise happen. It’s always a gamble, but in this case it paid off.”

The sessions were so inspiring that they came to define the album. The choir’s ebullient chanting is all over the opening track ‘Mayday’, a morse-code-inspired soul belter about a love emergency, in the proud lineage of ‘Rescue Me’ and ‘SOS’. They bring the album to a rousing, defiant conclusion on ‘Getting Back Up’. In between, they reveal a little more about themselves on the heartwarming ‘Semicircle Song’. When Ian needed a lo-fi R&B vocal for ‘Chain Link Fence’ – kooky and soulful but not slick or drenched in melisma – he approached a Detroit high school. “I love the idea of recording people who wouldn’t think of themselves as singers, who perhaps have never been recorded before.”

But this being a Go! Team record, where routine is outlawed, there are a multitude of other voices to be heard, sometimes in the course of the same song. Best-known among them is probably Utrecht indie-rocker Annelotte de Graaf AKA Amber Arcades, whose Dutch-accented English lends a unique flavour to ‘Plans Are A Dream U Organise’. Previous collaborator Julie Margat AKA Lispector delivers ‘Hey!’’s breathy French interlude. And sassy girl group kiss-off ‘The Answer’s No – Now What’s The Question’ is fronted by Houston-based Darenda Weaver, a Texan Mod that Ian found on Bandcamp.

The band’s own Maki helms ‘If There’s One Thing You Should Know’ with panache, and of course no Go! Team record would be complete without an appearance from Ninja, who unleashes a volley of verbal stingers on ‘She Got Guns’. Meanwhile, the charmingly unaffected rapping on ‘All The Way Live’ is sampled from a 1983 “after-school hip-hop project” Ian found on one of his epic crate-digging adventures. He considered asking a contemporary rapper to re-record it, but decided it would be impossible for anyone to unlearn 35 years of hip-hop history. Capturing those moments of authentic joy, unburdened by cynicism and ambition, is what SEMICIRCLE is all about.

In keeping with the album’s “marching band” theme, Ian stacked up sousaphones, glockenspiels and steel drums, mic’ing them all from a distance to recreate that gymnasium sound. The effect is a kaleidoscopic cacophony, almost as if the sound itself is bent and refracted in the metallic curves of a trumpet, comforting and intoxicating at the same time. “It’s recognisable as a Go! Team record but it takes the sound to a new place.”

Although SEMICIRCLE isn’t bogged down in polemical responses to the issues of the day, there are still some valuable life lessons to be gleaned. Ian is keen to emphasise that the vibrant utopia he and his cohorts have conjured up on their fifth album is not an escapist fantasy but a potentially achievable goal. “It’s about reminding yourself of the good things in life,” says Ian. “We don’t want to be dumbly optimistic and say, ‘Hey, isn’t everything great!’ but there’s something to be said for just getting on with it, for getting organised and not letting the fuckers get you down. Party for your right to fight!”

As always, it’s good to know The Go! Team are on your side.

the best Jerry, the best

Bandcamp Daily  your guide to the world of Bandcamp